7th October 1938 in Newton Abbot. She dedicated the

greater part of her life to serving our Lord Jesus Christ

as an enclosed Bridgettine Sister and made her profess-

ion at Syon Abbey, South Brent in Devon on 12th

Her Requiem Mass was on 16th October at St Paul’s

Church in St Budeaux, Plymouth. The celebrant was

Father Tim Lewis, who had got to know her in the last

two years of her life since she moved to Waypoints

Nursing Home in his parish, after St Peter’s Convent

“In her religious life as a Bridgettine,” said Father Tim

in his eulogy, “Sister was devoted in love to the Most

Holy Saviour, and his blessed Passion, suffered for us:  a suffering in which she has shared particularly in more recent years with the onset of dementia, and her own gradual decline. We don’t know the meaning of this suffering in God’s eternal purposes, but we trust that our sister is with the Lord and, freed from the constraints of human frailty, worships him now with full knowledge and understanding.”

At Syon Abbey, Sister Mary Bridget was a great asset to the community where for some years she held the offices of Novice Mistress and Prioress.  Sister Anne Smyth, the former Abbess of Syon, says that she was also a talented artist, illuminator, wood carver and gardener and was – for 26 years – the community’s cook. She was also the perceptive author of quite a number of published articles on Bridgettine life and Syon’s history.

Sister Mary Bridget Cotton with one of her sheep. 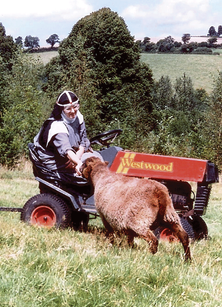 “For many years,” Sister Anne tells us, “she kept sheep,

including a breeding flock of 25 ewes. In later years she

attended the Requiem Mass. We will keep them in our

prayers together with her step-sister Hilary and husband

David as well as her Aunt Irene and cousins Rosie and

Marion who couldn’t get to the Mass.

Buckfast Abbey not far from the grave of Father Jack

Pack, another of her cousins.

“So it is our prayer,” Father Tim concluded,  “that Sister

Mary Bridget, who, through her consecration to Christ in

the religious life professed her belief in him and desired

to serve him ever more perfectly, may now receive from him the abundant rewards which he promised to all who give up everything to follow him. May this blessed hope strengthen our resolve to follow him faithfully in our own chosen vocation until we to come to the end of our earthly journey and he calls us home to his kingdom.”

PHOTO: Sister Mary Bridget Cotton, O.Ss.S. with one of her sheep.

Sister’s contemplative vocation centred upon her daily prayer in the chapel of Syon Abbey.  Her life of prayer was represented by her copy of the Daily Office of Our Lady, the unique Syon Breviary which rested on her coffin throughout her Requiem Mass.