on Friday, 5th May. There was a memorial

Mass at the Church of the Blessed Sacrament,

by refreshments in the Richard Reynolds Centre.

St Richard was a Bridgettine monk of Syon

to take the Oath of Supremacy making King

Henry VIII the supreme head of the Church in

being hung, drawn and quartered. The quarters

of his body were chopped to pieces and hung in

different parts of London including upon the

gateway of Syon Abbey itself at Twickenham.

The actual ornate section of gateway was

preserved by the monastic community of Syon

and is now in the Martyrs' Chapel at Blessed

Sacrament, Exeter alongside a terracotta plaque

of the saint by sculptor, Geoffrey Preston. 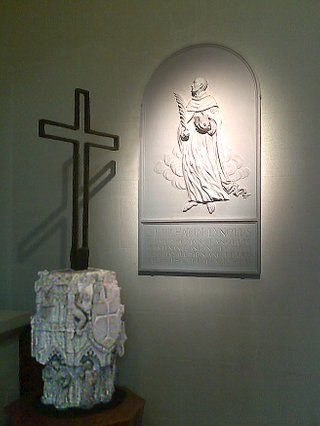 ABOVE: The ornate piece of Syon Abbey's gateway, which bore part of the body of St Richard Reynolds after his martyrdom,

alongside the saint's memorial wall plaque by sculptor, Geoffrey Preston.

Saint Richard, one of the Forty Martyrs of England & Wales, was canonised by Pope Paul VI in 1970.

In the Richard Reynolds Centre there were also

copies of the new English edition of The

celebrate the 600th anniversary of the

foundation of Syon Abbey in 1415 by King

the 'Daily Office of Our Lady', were available

commemorate the martyrdom of St Richard

Reynolds not only for his fidelity to the Church

but also because we believe he was a member of

the Reynolds family who lived nearby at Pinhoe,

the gardener at Syon Abbey, brought along her

album of photos and memorabilia which people

were keen to see.

The hymn to St Richard Reynolds, 'A Song of

Syon' may be copied or printed from HERE.